New York Times: iPad More Prevalent in Business Than Ever

In an article from this Sunday’s edition in The New York Times, Miguel Helft examines the market for tablet devices, like Apple’s iPad, for businesses. While new tablet PCs are forthcoming from Motorola, Research in Motion (RIM), Samsung, and Hewlett-Packard, the author focuses on the breakthroughs that iPad has already brought to enterprise companies.

Although many consumers may see the iPad marketed as an all-in-one entertainment center, businesses are viewing the tablet as a development for doing business more effectively, with increased mobility. In fact, big business is embracing the iPad in a big way. About Apple, Helft states:

The company, which sold nearly 15 million iPads in the nine months after the release of the device, won’t say how many were bought by businesses. But during a conference call with investors and analysts in January, the company said more than 80 percent of Fortune 100 companies [emphasis added] were using or testing the iPad, an increase from 65 percent three months earlier. Among those companies, said Peter Oppenheimer, Apple’s chief financial officer, are JPMorgan Chase, Sears Holdings and DuPont.

Development of business specific apps has coincided with the increase in sales of the iPad as well. Mobile employees can even access their Windows desktops through Citrix, a downloadable application for the iPad. Salesforce.com reports that over 60,000 business are using their Chatter app, which helps iPad users gain access to their business data. 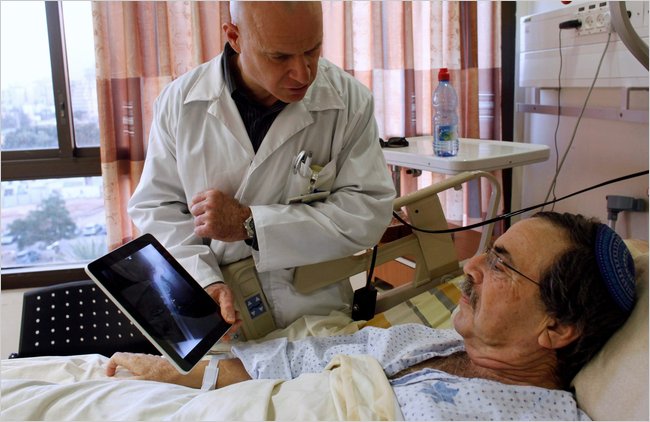 Dr. Nir Cohen showing a patient an X-ray image on an Apple iPad at a hospital near Tel Aviv. Copyright The New York Times, 2011.

Companies that haven’t ridden the tablet tide may soon be forced to. Many businesses are finding that employees are bringing their personaliPads to work – much like their iPhones – and are demanding support for enterprise email and programs.

“We can’t tell people not to use this technology at work,” said Brandon Edling, director of workplace technology at NBC Universal. “If we did, they would continue to use it and we would be in the dark about what they do.”

The need for companies to be PC-only is quickly fading, The New York Times reports. With higher security features, flexible, powerful business apps, and easier integration into mixed PC and Mac platforms, having a mobile iPad workforce, states Helft, is not only easy, it’s a standard best practice.

To read the article in its entirety, see After iPad’s Head Start, Rival Tablets Are Poised to Flood Offices.

All references to Miguel Helft’s February, 20 2011 article are under copyright of The New York Times. digital partners does not own the rights to the article or pictures contained in it.

Your feedback is valuable for us. Your email will not be published.
Cancel Reply